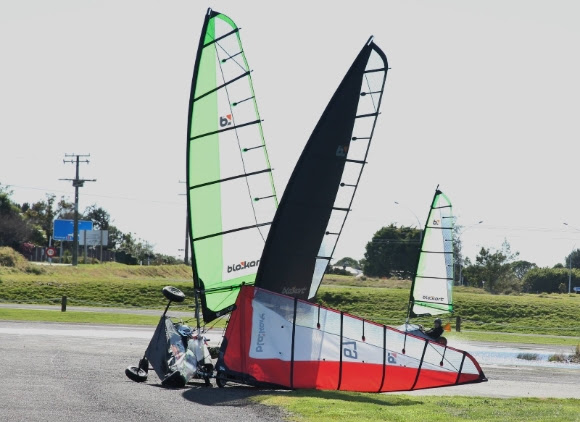 8 teams of five sailors plus wind all day resulted in 32 races and great fun at Papamoa.

The day started early with some making the trip down on the Saturday morning for an 8.30 set up and 9.30 briefing. The ABC teams had been rejigged after a few couldn’t make it at the last minute but 4 teams including our Hamilton club mates ended up on the start grid. Other teams came from the Bay of Plenty, Manawatu, with Wellington and Christchurch sailors combining to make up the Capital team.

The format was 3 teams of five sailors racing each other with only the top 4 from each team counting towards the team result. Races lasted 5 minutes. The course was reversed after 8 rounds to provide a variety of sailing.

There was enough wind for some practice sailing but as the first race got under way, the wind dropped out. 20 minutes later racing resumed as the breeze came in for the day. The expected increase in breeze didn’t happen and everyone sailed with a 5.5 metre sail all day, excluding a couple of changes to 4s by two of the lighter sailors. They changed back quickly with a fluctuating breeze.

There was all day food available, with the hot soup very welcome as the southerly wind came in. Thanks to Tina and Pam for organising this throughout the day.

Round 8 showed how tight the racing was with Plantastic and Dogs having a first equal and then Dross and Capital doing the same in the next race. Round 11, Westy handed Dogs a defeat which kept them in contention for the podium and the final fight for top honors began over the final 5 rounds. Plantastic went win less over the final 4 rounds, while Dogs won their last 4 races. Westy threw in a 123 finish to gain a bonus but got a last in the final race which ultimately cost them a podium place. Dross finished the day with a win but this was too late to make it into the top bunch.

32 races after starting, the final points were counted up and the winner announced at the after race function in the kiosk. There was plenty of comment on how well the day had gone and agreement that this type of event is huge fun and creates a competitive but also collegial atmosphere. It allows everyone a chance to get some wins and for team members to help each other on the race track to achieve the best team result.

Thanks to the timing crew of John, Trish and Julie and to the catering crew of Tina and Pam.