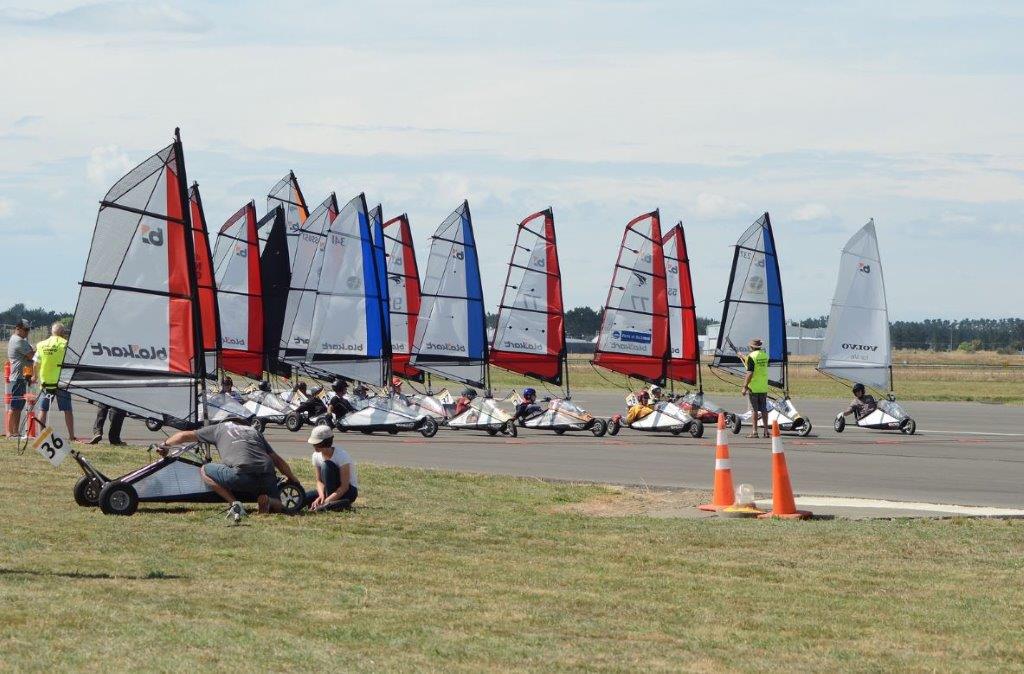 It was a mighty weekend, great company, fine weather and plenty of  wind all day for two days. There was plenty of action, a few collisions during the dial up, Karts flying onto the grass at high speed one or two accidents but not a lot of body damage. As you can see in the results  all divisions  we managed to get in 14 rounds of racing, that’s a lot of distance covered when you add it up, a few worn tyres, plenty of blisters and a pile of worn out bodies. Canterbury’s timing system worked perfectly, on its first outing, this mainly due to the work that Terry Helm has put into the operating aspect.  By day two Capital club member Phil Ready was part of timing control and operating the system most of the time. Thanks Phil.

Photos shot by Derek Miles can be seen at  https://flic.kr/s/aHsktX8i71

The Classes and  Divisions sailed;

Cruiser division attracted 10 entrants, a good number, and they were a good mix of the ability that you could be expected from true learners. Most had at least a pod and some other performance parts.  You could see them improving as the weekend progressed and that’s great. Congratulations to Ernie Watts from Manawatu taking out the class, and Daniel Burke (14) from Auckland  did well to get 4th in his first event.

It appears only the Canterbury Club are strong in production and puts effort into promoting this class.  This is a pity because Production is a great way to start sailing Blokarts, less cost, a more relaxed group, competitive and good fun. Also you appreciate the performance parts when you move to performance class. As you can see there were only six entrants, four from Canterbury and thanks to Manawatu members who also entered.

Cruiser and Production sailed together, one group off with a two minute dial up and the other group two minutes later. This worked perfectly, the only downside being that Production sailors caught up with some of the Cruiser group and this lifted the chance of an accident due to the differing skill level.

Michael Denton sailed brilliantly to win this class holding  off Alex Morris in second and most importantly son Mitchell Denton in third.  Michael had a bit of luck on his side as Alex took a few races to get his speed up, but after the first three  Alex started to apply the pressure and got team Denton  under his thumb. Mitchell Denton really impressed with his sailing ability and early on he looked to be a likely winner. However Michael and Alex managed to suppress him somewhat. Let’s not forget Amanda Norris, always a threat but just didn’t have quite enough power to knock the boys back. A dam good effort from a young lady sailing two Karts, that’s 28 races in total.   Considering their experience at this level the two Manawatu entrants also sailed very well, a great effort by them plus they were also sailing in two classes, a big ask for anyone..

Performance classes sailed an 8 minute race with 2 minute dialup, which gave most a 3 laps, as a quick lap was under 4 minutes.

For this fleet there was a really problem and that was team Heilbron from the ABC club. Team leader Dave Heilbron was way out in front most races, his experience showing and not far behind daughter Natalya. She even had the audacity to beat Dad in one race and will be a real threat at future events. Well done to both of them. Dee McCrea and Amanda Norris both put in solid performances to hold the rest of the field at bay and ended up on identical points.  On a countback Dee was awarded 3rd place and Amanda 4th, excellent results for both of them. Many  would have found the conditions a bit scary at times.

Canterbury really stood out in this class. Alex Morris was at his best and often had a huge lead on most of the competition. A well-deserved win. Then we have Davie Norris in 2nd place, he put in a great effort to keep in touch with Alex and on the second day when most were on 3 M sails, Davie changed to a 4 M and held his Kart down, no problem. An impressive performance in my opinion and  he is going to be a real threat at upcoming events.  In third place, Michael Denton, he sailed really well and while he couldn’t match Alex and Davie he held Graham Ingall from BOP club out and that’s very difficult to do, Graham is an excellent sailor.

Take your hat off to Wayne Osborn, club ABC.  What a performance, smooth, fast and always way out in front. A well-deserved 1st place. In 2nd Paul Beckett, the longest serving Blokart sailor in history and the inventor of Blokarts no less. Members will be relieved to read that even the best crap out at times and Paul capsized in one race. He has a long winded story on how this came about but in my book a capsize is a capsize.  In 3rd place our Terry Helm. When you consider that Terry spent a good percentage of his time running the timing system and producing race results it’s a miracle he managed to get out on the track at all. A good effort on his part.

With 69 entrants this was a big event. The attraction was Ohakea, I reckon it would be the best venue in NZ. Manawatu club really made sure the event ran smoothly, a very good effort on their part. Timing control was supplied with a one wall covered shelter, perfect for the job. A strange  thing happened on day one. Phil Ready was learning how to run the timing system, Then a steel pipe across the shelter roof came loose and hit Phil on the noggin, nearly laid him out. From then on he never looked back and soon became an important part of the timing team.

Capital heavyweight sailor Ian Timperley,  never far from the action, got spun out on a corner, took off backwards, taking out a runway light in the process.  Another heavy weight, Manawatu member Bernie O’Donnell  was pushing the starts and over the line on a few occasions. In one dial up he turned at the back of the field, didn’t have enough room and shot off down a slip road. As there were Kartsand ditches on both sides Bernie had to keep going and disappeared into the distance. The timing team discussed the possibility that he might never return but after a long wait Bernie  sailed back and started his race. Alex Morris blew the inside rim off a rear wheel quite a distance from the pits. He swapped the wheels over and after a long delay sailed back on the rim, now plugged into the windward side and under a light load. Unfortunately we haven’t got a photo of that. The worst accident was  Manawatu member Colin Cook in an ugly high speed  corner Colin’s fibreglass axle broke at the chassis and he tipped over, landed heavily and badly grazed his arm. A normal capsize leaves the sailor clear of the ground, this is not the case with a broken axle, your body is at ground level and it’s going to hurt.

Some Canterbury sailors suffered blisters on their hands, Alex Morris was a bad case. More so as he doesn’t use a ratchet block. Davie Norris seeing a chance to knock the competition back loaned Alex a pair of “go fast” gloves. Unfortunately they were super slippery as well and in the next race  Alex couldn’t hold the sheet at all!!  There were a few casualties during the dial ups. This is a critical time for sailors as they try and get the best start. It’s also busy with 15 plus karts rotating and incidents happen. Usually because someone changed direction or tried to re-enter the group after being over the line. Fortunately the incidents were on the minor side.

Quite a few sailing Cruiser class were not equipped with windicators. While these are not cheap to buy they are essential. No one can actually see the wind and these are an accurate gauge of apparent wind direction and allow the sailor to adjust the sail to the best position for maximum power.   Cruiser sailors were also sailing way up the runway during the dial up. This is only an advantage if you can accurately judge the return time so as to hit the line at speed and on time. Races are won or lost at the start, sailors need to give themselves the best chance. Daniel Burke was receiving instructions from Dad (Allowed in Cruiser Class – as its learning opertunity) who was  standing at the edge of the track. A wise move and he was dialing up really well by using tight high speed circles across the wind. Could this be the same youngster who, when Dad went to the toilet (they were mounted on a special trailer), started giving the toilets a  really good rock.

Finally, thank you Manawatu, everyone really enjoyed your event. Next year will be the Master games.