The power of a blokart, like any other sailing vessel comes from the way in which the sail catches the wind. A sail is in fact a vertical wing. It operates in the same way as a wing on a plane. A blokart uses this wing (the sail), and the wheels (in place of a yachts centre board) to propel it forward.

The power comes not from wind blowing on a sail but pressure difference around the sail (high pressure on the side towards the wind, and low pressure on the side away from the wind). In nature, high pressure moves towards low pressure, as a result, there is a perpendicular force exerted on the sail. This is shown in figure 1. The forces on the wheels which track the blokart in a single direction (forward not sideways) much like the centre board on a yacht, act in combination with those on the sail to power the blokart forward. 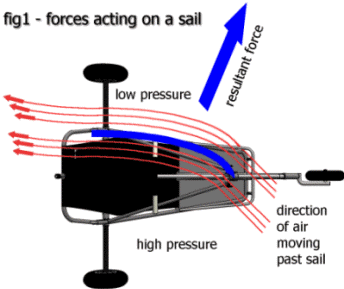 The combination of the wheels and sail do result in a forward motion, but there can be some slipping depending on the surface being sailed upon. The term for this slipping is “drift”. On a loose surface, as shown in figure 2, the blokart will not travel in the exact direction in which it is pointing. The looser the surface, the more drift the blokart will experience. This is an important concept to be aware of, especially if there are hazards nearby. 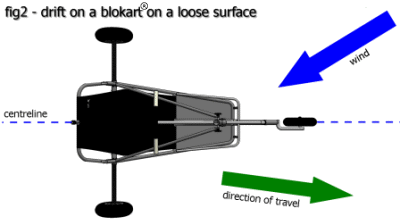 The last aspect of the physics of sailing that we will discuss is the concept of true and apparent wind. These terms refer to the wind and its changes due to the wind direction and the speed of the blokart in relation to its direction. True wind is defined as the direction of the wind to a stationary observer. Induced wind is the wind experienced due to the forward movement of the blokart. A good analogy is riding a bike. When riding a bike on a day with no wind, the rider still feels a wind. This wind is induced by riding the bike through the air. A blokart experiences wind in the same manner. The combination of these two winds is the actual wind experienced by the blokart. This wind is called apparent wind. Figure 3 outlines the three winds and how they relate to one another. 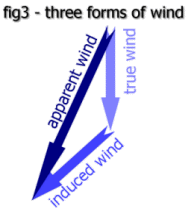 As mentioned earlier, the knowledge of these basic physical principles are not needed to be a proficient sailor. They do, however, help sailors understand how the wind conditions affect a blokart.