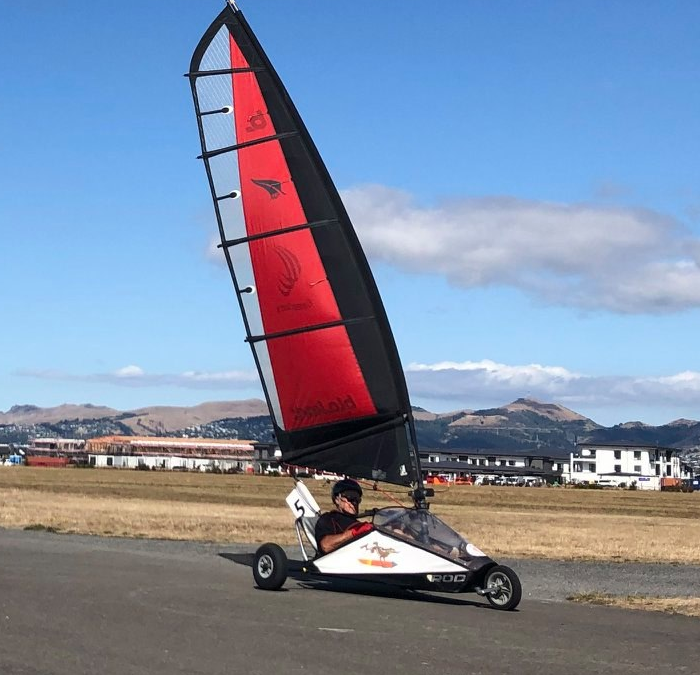 Thirty Nine blokarters arrived at the Christchurch, Wigram track for the 2020 NZO. This was run as 6 classes with the production lights and heavies run as one group.  A round took about 75 minutes. On day one the weather started around 8 knots from the NNE. This meant we had a downwind start in the hangar area then back across the top to the taxiway track. It was then a tacking fest all the way up this leg to the wing mark and then along the dog leg to the top mark. After the rounding it was back to the wing mark then either jibing back down the taxiway, or if the wind swung a little, a reach back to the start/finish line. This provided plenty of passing opportunities all around the track.

Day two saw good wind all day again from the NNE swinging to the East later. We started on 5.5m and as the breeze increased some changed to 4m and then 3m later on. For those staying on the 5.5m sail there were good gains to be made downwind if prepared to do the hard work  upwind. Plenty of exciting sailing and definitely requiring taking to the grass at the top mark.

Day three arrived with light winds from the East but after one round of racing dropped out completely. It was a case of hurry up and wait. A good chance to go for a walk or visit the Aircraft museum. Around 3pm the promised SW wind arrived and quickly built to around 15 to 18 knots. 4 metre sails were the order of the day with the lighter divisions on 3 metres. This wind was accompanied by some heavy, cold rain but provided some much awaited for exciting sailing. We got two rounds in before the close of day.

Day 4 provided a beautiful sunny day and everyone hung up all their wet gear to dry out from the day before. Unfortunately there wasn’t any wind for the entire day and the event was called to a close at 3pm without a race being sailed.

The prize giving dinner was held just down the road in a public hall with spit roast meats and vegetables. PRO and Canterbury club president, David Tillman, was an excellent master of ceremonies and a well-run NZO came to a great conclusion.