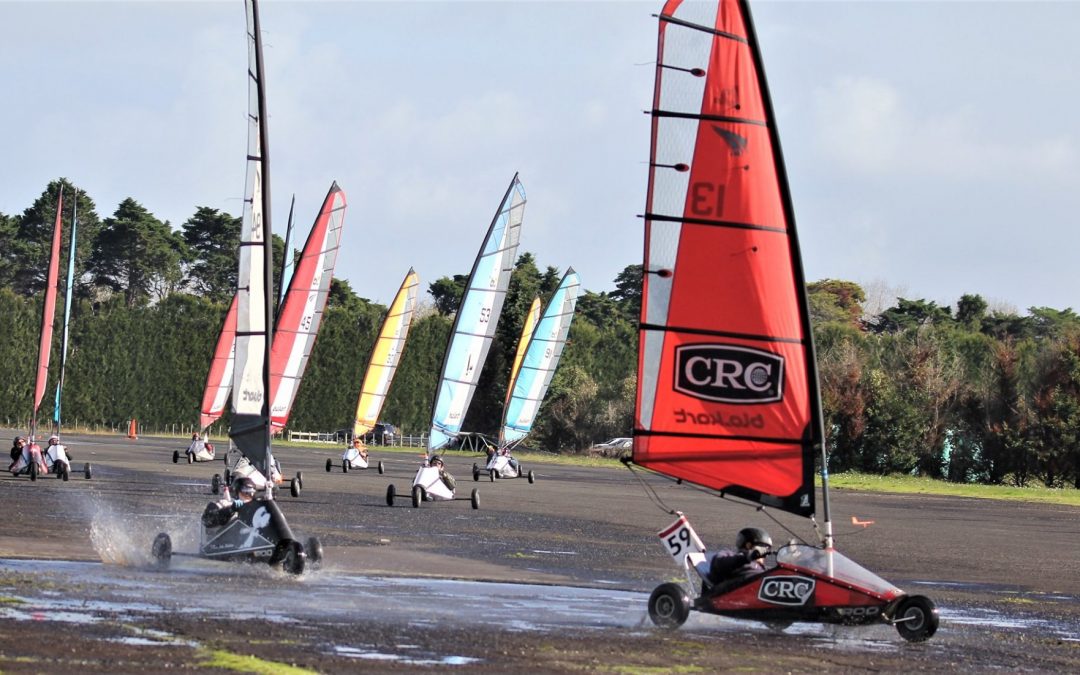 The forecast didn’t look good a few days out but the wind arrived at the right time to make this another successful event. The ABC committee had the track looking good and with an extra 500 metres of runway the scene was set for some longer tracks and exciting racing. Friday the tents went up, the flags were out and about 80% of the sailors had weighed in and registered, the rest doing so early Saturday morning. Teresa was PRO and the race committee was made up of representatives of all the participating clubs. Briefing at 9.30 followed by the first start.

Unfortunately there was not great support from out of town clubs so we ended up with only three divisions, so plenty of racing for everyone. 8-10 knts of breeze was enough to set a course part of the way down the runway and this was extended as the wind came up a bit more. 7 minute races allowed for three laps, sometimes four for the leaders.

The wind was W-WS which meant gybing down the runway, a 180 degree turn and tacking back up. With various options to get down to the bottom mark, there was plenty of passing opportunities. At about 3 pm, there was slight drizzle and the wind dropped away. We waited around until 3.40 but then packed it in after 19 races completed. Trevor Register was having a good day in the middle weights with the other 2 divisions fairly close.

Saturday night was dinner at the RSA and handing out of the spot prizes. Plenty of talk about the day and the good sailing.

Sunday, no wind at 8am, and little bit at 9 am and by 9.30 10 knts and building as racing started. What a terrific days sailing. The wind built so that it a high speed turn at the bottom mark and allowed for the 4 metre sails to come out for a while. Some tried early and failed, some tried and succeeded, being a lot faster than the 5.5 in 12+ knots, even gybing down the long runway. The racing was even and close with various winners in each division with plenty of lead changes depending on which downwind course you picked. There were three options to get to the bottom mark. Terry was asked to move the mark further down the track and promptly put it next to the biggest puddle. This did create some nice photo opportunities but everyone got wet (see facebook for photos). Thanks Terry. Terry was also the only one to tip over!

Racing continued through until 3.30 with everyone getting to 15 races and a second drop, most welcome for some of the sailors. There were plenty of grins, a few tired bodies, but it was good sailing and the wind direction meant the best possible course was set.

In the Middles, Trevor shared around the first places a bit more but showed plenty of tactical ability in the heavier breeze to maintain his lead.

The Heavy division was always a close battle with 6 different sailors getting wins over the 15 races plus another 3 getting top 3 places. Lots of passing as everyone made the most of the breeze moving around quite a bit.

The Supers had Theo making a charge and dominating the day with firsts and seconds all day.

A huge thanks to Teresa for being PRO for the 2 days, ably assisted by the race officers who had light duties. Thanks also to Kirsty and Julie for efficiently running the timing and results without any bother.

Thanks to Rosie and Tony for running the barbeque to keep everyone fed over lunch plus the hot drinks throughout the day.

Thanks to those from out of Auckland who made the effort to attend this BAI event, 3 from Manawatu and 2 from Christchurch plus the contingent from the Bay. Great to see you at Ardmore.