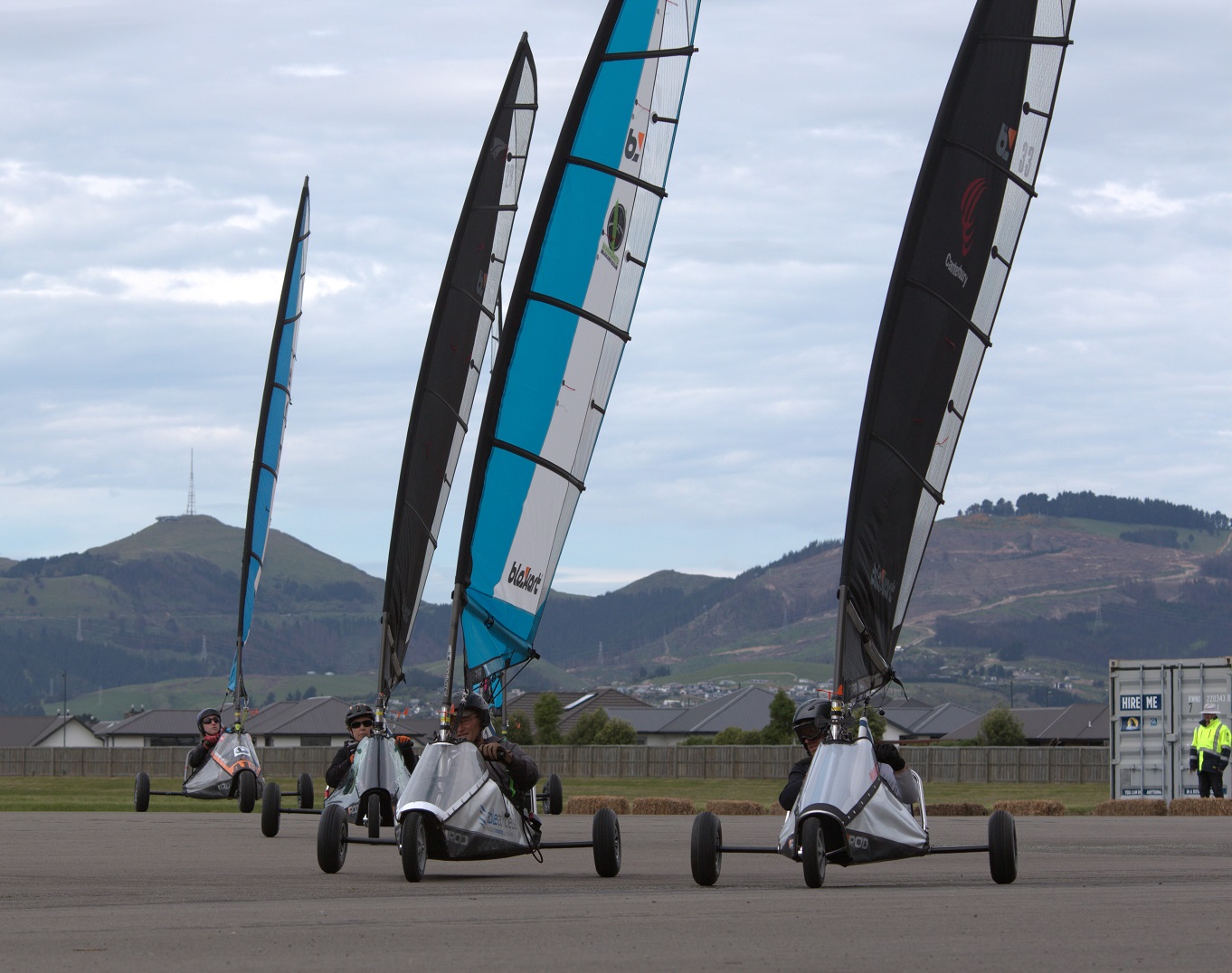 NZO 2017 Wigram Canterbury
After a very wet few days in Nelson at the SIO with no wind, the NZO at Wigram
started off in the same vain with Wednesday dawning very wet. Luckily things
cleared and by mid-day the rain held off for the rest of the Open.

Most got scrutineering and registration underway on Wednesday and a good number of our
visitors from the north were out enjoying strong winds from the south on their 4m
sails in the afternoon. The track was damp but that didn’t stop some fast runs and
having to take to the grass at the top to get around the mark.

There was also a film crew on track from CTV doing a story on our oldest member Jim Gordon.

Thursday dawned a beautiful day with wind and there were a number out early
practicing on the smooth Wigram track. PRO David Tillman did a comprehensive
briefing for the Open and things were underway, but by the time briefing was
complete the wind had become unstable. Performance Lightweights were first up
and although there were many attempts to get some racing underway, they were all
abandoned with the wind disappearing halfway through the races. Racing (well lack
of) was abandoned late in the day.

Friday was a better day with wind although it was a little up and down and went
around the compass over the day.

Again Performance Lights were up first and there was no clear leader during the
day with Amanda Norris, Justin Annan and Debs Davidson all taking wins. The
day ended with Amanda and Justin tied for first. Robert Deighton was enjoying the
smooth surface of Wigram and was picking up the odd 4th place. 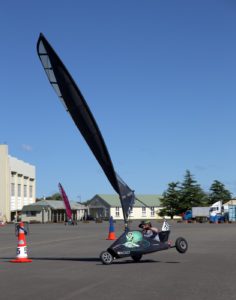 Performance Middle Weights was very similar with Mark Hursthouse and Kurt
Smith trading first places but they were also getting 8th and 10th placings so by the
end of the day there was only 1 point between 2nd to 4th placings with Bob Louden
and David Tillman right up there. Both Mark and Kurt had knock downs on the
apron part of the track with Mark taking the prize for doing it twice. Now named
“Mark’s Corner”

Performance Heavy was a bit of a two way battle with Russell Harray and Alex
Morris trading wins with Russell coming out on top at the end of the day. A good 10
points and more back was Barry Cole and Michael Denton battling it out for third.
Bob Jelley was also up there but had a DSQ earlier in the day so he was looking
forward to a drop.

Performance Supers were also close although Wayne Osbourne in typical style
was dominant and took the lion’s share of wins. Terry Helm was keeping Wayne
honest while Peter McCrea and Theo Vandervoort ended up third equal at the end
of the day. New to the game Steve Fox was sailing well and at times was up in the
lead group.

Production all sailed together but it was split into two divisions due to the large
weight range.

Production lights we saw the match up of the brothers with Mitchell Denton made
to work hard for his wins from his younger brother Matthew Denton although taking
out a clean sweep in the end. Derek Miles and Peter Johnson were also in a
close battle for 3rd place. Derek blowing a tire at the top mark in race 4.

Production Heavy was a dominant performance from Alex Morris although
Michael Denton did keep him honest at times with Alex having to do a comeback.
In one race Alex broke his mast in the dialup. John Guard and Bernard McGillen
were also having a tussle.

We managed to get 7 rounds in with an extension to the day to race through to
6:00pm. There were a number of sail changes up, down and up again between the 4
and 5.5m sails. The last race of the day was the most exciting for the Performance
Heavies as the southerly hit just on race start and all were carrying 5.5 meter rigs.
With wind was more suited to a 3 meter so there were some very fast and over
powered runs with lots of grass taken to slow down. Big smiles by all at the end of
the race though.

Pack up was late and there were many tired body’s after a long days racing. A few
refreshments at the Harvard bar soon had everyone relaxed.
Saturday again was back to light winds but we managed to get another 3-4 rounds
in depending on different classes.

Performance Super Heavy were first up and they are always hard to get off the
mark in the light winds. Eventually things were under way and the light winds mixed
things up with Peter McCrea and Steve Fox taking wins. This closed up the field
and with the drops coming in people were changing places.

Production Lights were up next and hello, Matthew Denton gave his brother
Mitchell a lesson in light wind sailing winning the first two races and the last of the
day, closing the points up and Mitchell was starting to look worried. Derek and
Peter were still in their own battle.

Production Heavy was still a dominate result with Alex leading Michael.
Performance Light was a change up with Debs Davidson sailing well as she does
in the lighter winds taking a couple of wins. Also Shannon Fox had a blinder in one
race and came through for a third place. Again it was very tight and the likes of John
Paverd was always ready to pounce and was often in the top 4.

Performance Middle weight had Mark Hursthouse back in his dominant mode.
David Tillman also was sailing fast taking out a race win. Kurt Smith was having a
shocker and fell down the leader board. Graham Ingal “Mister Consistent” came to
the fore in the lighter weather and jumped up the leader board. Dee McCrea also
started to shine in the lighter winds with some close finishes.

Performance Heavy was a dominant performance from Alex Morris taking 2 wins.
Michael Denton and Russell Harray were unlucky in the last race with the wind
dropping on the last lap leaving them stranded in 2nd and 3rd before the fleet from
half a lap back sailed through them on the new breeze mixing up the results for that
race. The heavy’s class was very competitive with a hand full of people looking for
the podium. 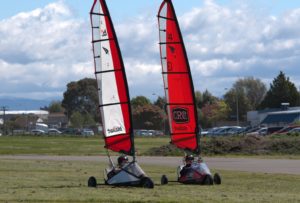 The day closed at 4:30 allowing everyone to head away for the event dinner where
there were lots of laughs and an enjoyable meal. There were a few announcements
from our recently elected NZBAI President Barry Cole on future events and updates
from around the world. Canterbury had also organised some great raffles with
impressive prizes and there plenty of smiles with the winning tickets.

Sunday was another slow start and we only managed to get one Performance
Heavy race completed. The race had a slow start but then wind came in only to
soften just as the leaders finished. Jonathon Burke was unlucky enough to explode
his tire in the last race.

After a long wait to see if the wind was going to preform, eventually the event was
called early due to the lack of wind.

Prize giving followed with Canterbury doing extremely well at their home track
winning all but two of the divisions and having multiple people on the podium in
every division. Well done Canterbury.

Mark Hursthouse burst into speech on the winning of the Performance Middle
Weights. Finally he was dragged off the podium. There was a cool family moment on
the podium with the Denton Boys taking 1st and 2nd in Production Lights.

Overall the entire event went well with no real major incidents, great weather
(although not as much wind as was ordered), a good social time and Blokart
competitive spirit. Thanks to PRO David Tillman for running the event and making
the calls when required.

On behalf of the Canterbury Blokart Club I would like to thank all that traveled to the
2017 NZO event and made it the competition it was. 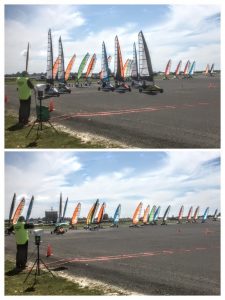