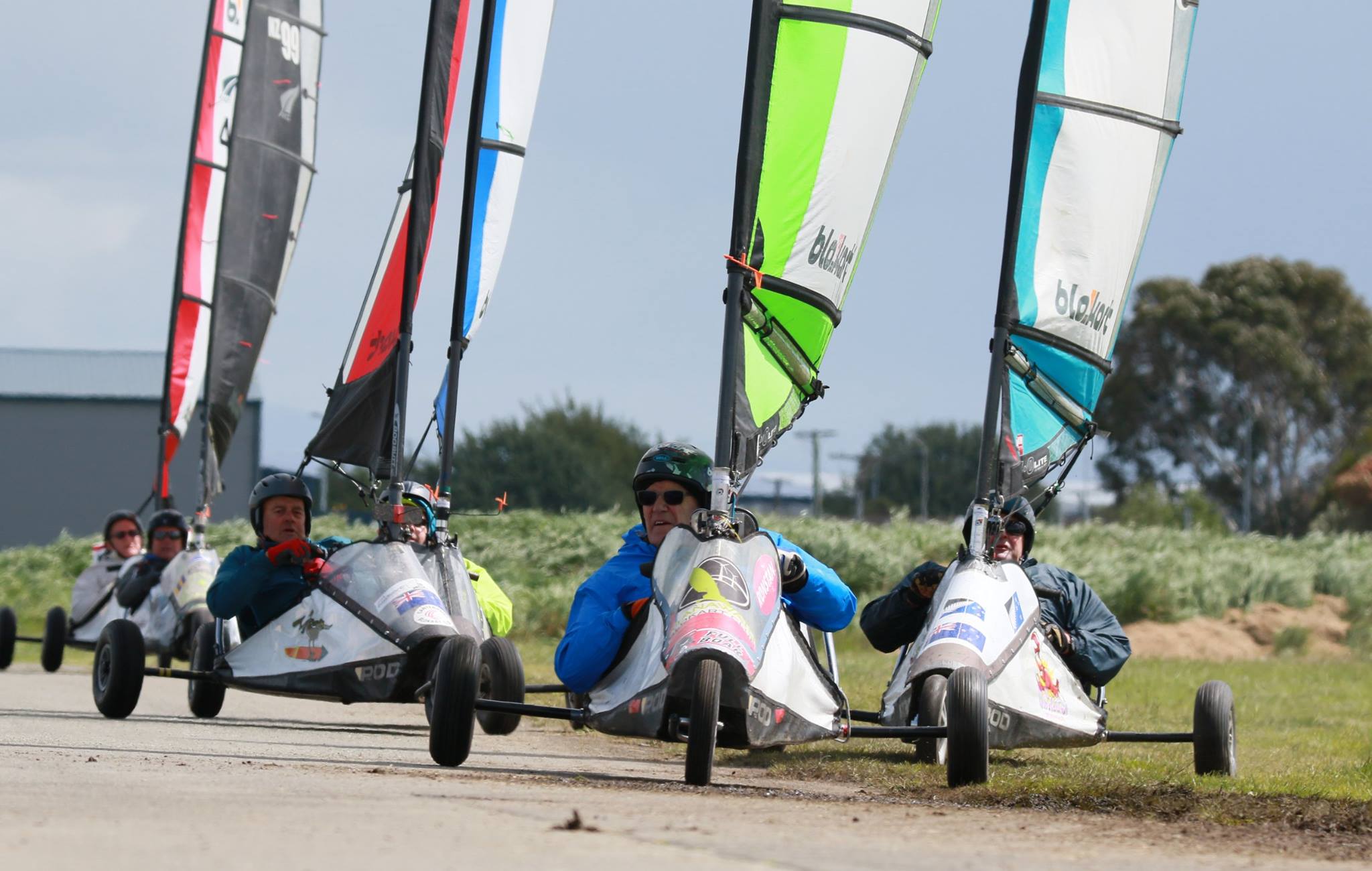 The SIO is a NZBAI annual event; this year hosted by the Canterbury Club at their local track, a large roughly L shaped sealed area left over from the old Air Force base. The sealed portion is a wide apron in front of two hangers joined onto a long taxiway with a bend at the far end and finishing at a boundary fence. The seal is very smooth although the apron includes a covered in drain through the centre and gives Karts a good dump when driven over at speed. It’s not a lonely place as the rest of the area is a large paddock in which a family of hares reside.

Canterbury weather has been up and down over the last few months with plenty of rain and calm periods. While there were many opinions on probable weather during the event many predicted there would be rain and that was a reasonably accurate assumption.  Friday was bright and there was a light wind so those entrants who arrived on site early had plenty of time to become familiar with the track.

Entries had been pouring in and by the time they closed they totally 61, a record for the SIO. Entries were in two classes, Performance and Production. A Performance Blokart is a standard product modified by using different components that enhance its ability to sail quicker and they are usually recognised by the protective cover (pod) that encloses the sailor and chassis. Production Blokarts are standard “out of the box” and only allowed limited changes to their original components. Slower than Performance rigs they are just as competitive amongst themselves and very well supported by Canterbury sailors. At this event there were 40 Performance entries split into three divisions by weight and 21 Production entries split into two divisions by weight.

Approximate weight bands were, Perf light – up to 77 kg, middle – 78 to 89 kg, heavy -90 kg and up. Prod light – up to 80 kg, heavy – 81 kg and up. When you include more than about 15 sailors in a race the taxiway can become congested, disadvantaging some of them. Sailing in smaller groups is a fairer option.

Saturday started with rain, rain and more rain. That was the down side. The good part was that a wind from the South was building nicely and after the first couple of races most sailors had changed from 5.5 M down to 4 M sails. Unfortunately the tall hangers block winds from the South and the circuit layout was restricted to the taxiway. I am told it was a sausage course due to its shape. To negotiate the end of the taxiway safely required sailors to move onto the grass at speed prior to turning and the area gradually became a muddy bog. 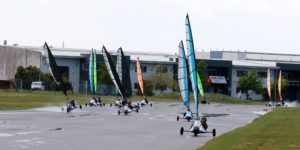 By midday the sky was clearing, the rain disappeared and the wind stayed with us. It did shift around to the South East and race control extended the course by adding a turn marker on the apron, thus increasing the skill factor. Races continued and by 4.45 pm when the last race finished the three Performance divisions had completed seven races and Production six. The paddock was soon empty as everyone prepared for the official meal that night.

Sunday dawned with a light wind from the south west direction and not a sign of rain. With 5.5 M sails fitted everyone was soon ready to go. Race control had moved the start/finish line further down the taxiway, this to allow for easier starts and also reduced the track back to taxiway only. Races are recorded by time rather than laps. Crossing the start/finish line in both directions doesn’t cause any issues. As the morning progressed the wind moved to dodgy mode. That means it continuously swung from South East to North West and as it shifted, insisted on stopping for a rest in-between. 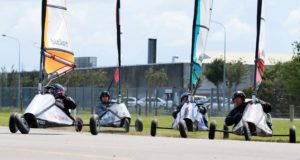 By midday Production light were struggling to finish their 9th race, only managing part of a lap before being marooned out with the hares. Finally race control decided that the day was unlikely to improve and called a stop to racing. Performance divisions managed nine races in total and Production remained stuck on eight. However everyone had completed enough races to give everyone a drop. That allows them to discard their worst race result.

At these events prize giving is held trackside, this saves a lot of time and allows travelling sailors to leave for home quickly. The host club (Canterbury), known for innovation and resourcefulness erected a purpose built podium on which the winners stood for official photos and much applause from the assembled mob.

In 1st place Auckland member David Heilbron, a very good sailor who handled the track well and is usually at the front end of his division. A great result for him.

In 2nd place, Canterbury member Mitchell Denton. One of Canterbury’s younger sailors Mitchell is very quick with excellent sailing skills. He managed a couple of race wins as well. In this field, to finish not far behind David Heilbron and ahead of Graham Ingall is just fantastic.

In 3rd place, Bay member Graham Ingall. Graham has been sailing for a good number of years now and is always a threat, a good result for him.

Worth a mention is Jim Gordon from Canterbury. While he was at the lower end of this field he is capable of more speed and it’s a great effort for an 85 year old. Well done Jim. 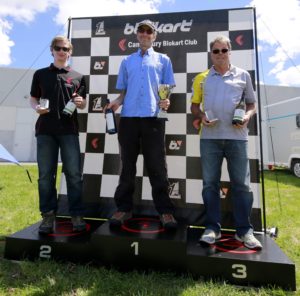 In 1st place, Canterbury member Alex Morris. Another younger member, Alex is reasonably casual, but when the pressure is applied he is super quick and makes piling on speed look like a Sunday jog. When you can drop a third place as your worst result at this level of competition you are looking good.

In 2nd place, Auckland member Barry Cole. A very experienced sailor Barry sailed well under a lot of pressure and this was a well-deserved result for him.

In 3rd place, Canterbury member Michael Denton. Michael will usually be found up at the front end of any class he is sailing in. This was a very tough field and he would have been feeling a lot of pressure from in front and behind. A good result for him. 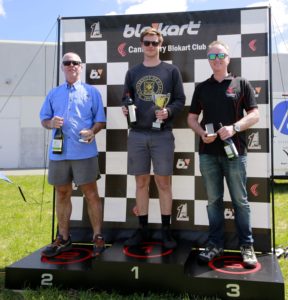 In 1st place, Canterbury member Terry Helm. The problem with this division was that the top five finishers are all very capable and all won at least one race. Terry did well to stay in front with a bit of a point’s buffer. This was an excellent result for him.

In 2nd place, Bay member Colin Davidson. Colin sailed consistently throughout  to hold on to 2nd.  He is a force to be reckoned with at any event.

In 3rd place, Bay member Theo Vondervoort. Theo is another excellent sailor and always threatens. Although on equal points with Colin, 8th place in race nine did him in on a points count back. 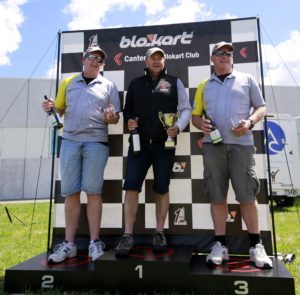 In 1st place, Canterbury member Mitchell Denton. An outstanding result for Mitchell, when you drop a 1st place, well don’t feel too bad about it. As well he sailed in two classes and that’s no mean feat.

In 2nd place, Canterbury member Matthew Denton.  Our youngest youth member and Mitchell’s brother, he sails with the same skill. Michael is their father and the family have been sailing Blokarts at the beach since way back in 2004. We saw the results of their experience over the weekend.  This is an excellent and well deserved result for Matthew, well done.

In 3rd place, Canterbury member Barry Emms. This was a great result for Barry and climbing onto the podium for the very first time threw him into a state of shock. However after a few glasses of wine just won he gradually returned to normal life and has stopped asking the dog how it all came about.

There were two sailors in this class who entered Cruiser class but due to a lack of entrants were moved up to Production.

In 6th place, Auckland member Daniel Burke. Daniel was the youngest sailor entered in the SIO. He sailed really well and showed glimpses of his potential over the weekend. A bit more experience and he will be flying.

In 9th place Manawatu member Peter Curtis. Peter is very new to our sport, only entered at the last minute, and borrowed a Canterbury club kart chassis to which he fitted his own gear. It was noted that the downhaul rope was far too short and Peter was not able to release enough sail tension for good downwind speed. However he boxed on and enjoyed sailing with the mob. Great effort Peter. 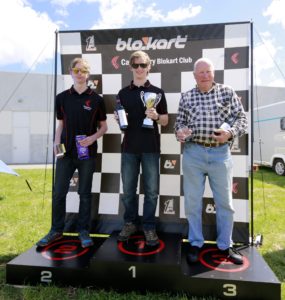 In 1st place Canterbury member Alex Morris. Alex sailed as he always does, quickly and with skill.

In 2nd place Canterbury member Michael Denton. Michael is usually Canterbury’s top Production sailor but Alex kept the lid on him. An excellent effort by Michael and he kept Alex honest.

In 3rd place Auckland member Ray Kelly. Ray has sailed for a good number of years and always provides a high level of opposition. On this occasion he was kept in place and coped with pressure from behind as well. 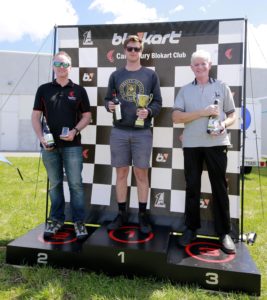 Readers will have noted that five Canterbury members entered in Performance and Production class. This is not unique, duel entries have occurred at past events. I would think that this was the first time we have managed to receive five duel entries though.

On behalf of Canterbury, the host club, I would like to thank other clubs for their level of support. Wide ranging support makes an event so much more successful and all sailors benefit by being exposed to a large range of sailing skills.