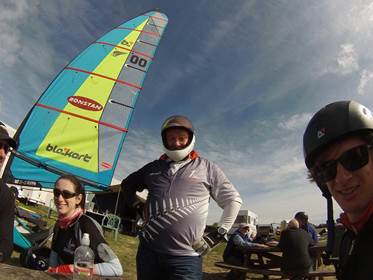 The 2015 SIO was held by Canterbury at Wigram.

Friday was for registration and practice, and an opportunity to set up and trial  the race timing equipment from Auckland Club.

Divisions were merged to suit the entry numbers resulting in 3 race divisions: Light and Heavy Performance, and Production with 13-15 competitors in each division.

Lack of wind put paid to any extended practice and so we made an early adjournment to the nearby Canterbury Blokart Club “Clubrooms” –  The Havard Bar – which was a chance for some serious socialising with other competitors from the Bay, TOTS and Canterbury clubs.

The wind built substantially during the day and competitors progressively switched to 4m sails with the odd lightweight in 3m.

A total of 21 mostly 8 minute races were run during the day, and with only 3 divisions meant non-stop action.

The light and flukey winds predicted looked the order of the day on arrival at the track. Racing was delayed until 11am by which time a steady SW had developed. A course with a tricky downwind start was set resulting in some tight and competitive racing.

The wind dropped out completely around 3pm and that looked to be the end of racing for the day. But within 20 minutes the wind had swung 180 degrees to the NE and was close to 4m strength – so racing was quickly resumed using the same course but now with a more orthodox upwind start.

A further 18 races were run on Sunday, meaning 39 races overall in 2 days.