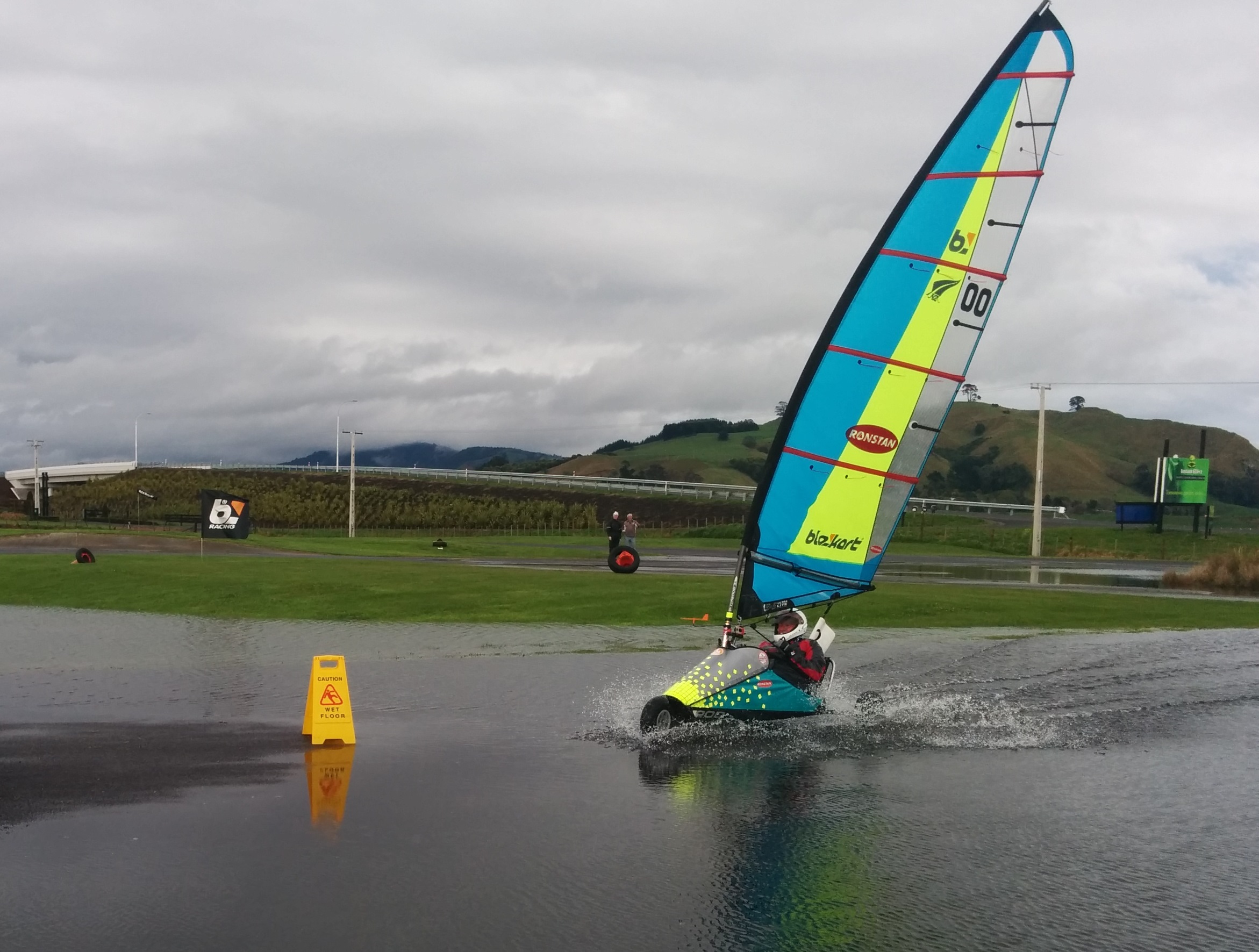 The event was held over 4 days, kicking off at 12 noon on Thursday 17 September. Entries got to 69 with both the middles and heavy performance divisions having to split into 2 heats each because of the numbers on the track. The weigh in changed a few people as a result of the new IBRA rules of adding 1.5 kg to your scale weight.

It was good to see 4 Aussies making the trip with Russell and Brenton back for the 4th time.

The weather was changeable with some rain on Friday leaving a damp track and the wind never getting over 10 knts for the first 3 days. Saturday night, Papamoa had torrential rain and on arrival at on Sunday, the track was mostly flooded. The race committee postponed racing while some of the water drained and a pump was used to clear part of the track. In the end we sailed by mostly dodging the deep parts of the water on the track, with some spectacular shots being taken as karts went through the water hazards.

We aimed to finish round 15 and complete 2 more rounds. With the wind up, this looked easy to achieve. The rain held off until about 12.30. By 1.15 pm we finished the first heavy division race in a dropping breeze, down to 5-6 knts with steady light rain. The next race, heat 2 for heavies started twice and had to be stopped. At 1.45, the last 2 races were abandoned and the wind dropped out and heavy rain came through, just in time for packing up.

The first race, production class, started in light conditions on Thursday,with everyone sailing with a 5.5 metre sail. The ABC had 4 sailors in production with Matt making a late change from performance and Grant entering the day before, joining Nick and Ray. Michael from Canterbury took the first race to show he was going to be the person to beat in the light conditions.

Matt started to get used to the track in the production division getting a win and a couple of 2nd to finish day 1 tied for 1st with Michael. This battle continued throughout the 4 days, each getting wins but Michael being a bit more consistent to pull ahead by a few points. Race 7, Matt was leading and sailed the wrong course, Michael thought this was a great idea and followed, both having to drop a DNF. Les also sailed consistently to take out 3rd spot, well ahead of the rest of the bunch.

In lights, Sarah (ABC) and John Paverd (ABC) both got off to a reasonable start, The light weights developed into a fantastic battle between Sarah and Deb (BBC) with John  also being very consistent in his sailing to finish in 3rd overall. Going into the last day, Deb had a 1 point lead with 2 races to sail. With the track mostly under water, Sarah had an anxious wait to see if the races were going to happen. Sarah took race 16, Deb 2nd to leave them on equal points for the last race. Sarah nailed the start and lead comfortably for the first 4 laps but in a dropping breeze Deb was making gains. The chequered flag came at the right time with Sarah taking the win by a few seconds. Another lap would have been interesting.
In middles, Graham (ABC) had some good wins throughout the first 3 days, despite not always getting the start right but being able to work through the fleet with great speed over the other sailors. Alex from Canterbury, was also going well and with split heats they were both sailing very consistently in the top 3. The end of day 3, they were on equal points and so again the final day of wet sailing was going to decide the winner. Alex took 3 wins to grab the trophy, Graham got a couple of bad starts and ended with 3, 4, 2 for a comfortable 2nd overall. David (ABC) also got a couple of wins on the last day to get within a few points of Graham with Barry, after a slow first day, also sailing consistently to be only a couple of points back.
The heavy weights, with 2 heats, was always close. Russell (ABC) started with wins in the first 5 races but Ross (BBC) and Bob (BBC) were also sharing some 1st places and staying close with 2nds and 3rds. Mark, (ABC), in his first major competition, was also learning fast and getting some top 3 places to keep him close and Russell Whitehouse from Aussie and Darryl (ABC) were also sailing very consistently. By day 3, it was a race between Ross and Russell for the top spot with Mark and Bob battling for 3rd place. Mistakes are costly when racing is this close and with Russell and Ross often in different heats there was only 2-3 points difference at any time during the event. Russell’s consistency finally paid off, taking wins in 7 of the last 9 races, Ross getting 6 wins and finishing 2 points behind. Mark held off Bob to take third, 4 points ahead.
The super heavies was really a matter who could take the minor placings as Theo (BBC) stretched out his lead in the first couple of days. Wayne (ABC) held second, but quite a few points back and ended up fighting off Peter McCrea (Canterbury) and Colin from BBC. There was some tight racing with this group as getting the puff at the right time meant big gains to be made. The last day saw plenty take to the deeper water, slower and wetter but a shorter distance. Others sailed the dry track and kept the speed up. Wayne ended up a comfortable 2nd, Peter taking 3rd.
Day 4 finished with everyone wet, but mostly happy. 4 out of the 5 divisions were decided on the last day with some exciting racing and many calculations taking place, working out what needed to happen in the last races to decide the podium.
Prize giving was held in the kiosk, lots of damp bodies but plenty of smiling faces as everyone relaxed and enjoyed the last hour of the event.
Photos are on the BAI and ABC facebook page plus the ABC website has a link to many photos over the 4 days. John, the professional photographer will have his photos, colour coded, available on his website www.vandi.co.nz/events.