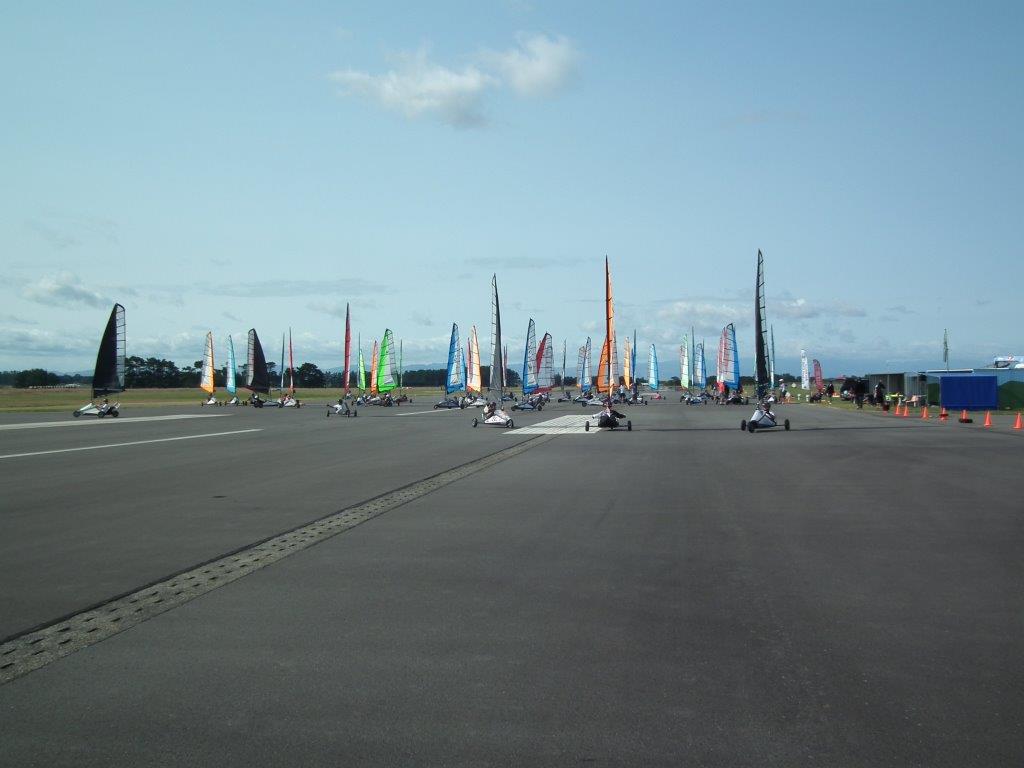 Most of the sports involved in the Masters games are held in Wanganui, Blokarts are hosted at the Ohakea Air Force base.

The Masters is a two day event held on the runway and narrow roads  at the Ohakea Air Force base. Capital member Phil Ready and wife Debbie provided and ran the timing equipment and the Manawatu wives provided a very nice lunch each day.  Saturday morning we were all lined up ready for an on-site entry at 8.30 am. This is strictly controlled, gates open, all in, gates locked. Fortunately Manawatu President  Gary Clark works at the base and liaises between the Air Force and NZBAI.

The various age groups were combined into four sailing groups so we were all sailing with at least one other age  group. This made it hard to tell what was happening on the track and there would have been times where a sailor from one group could get in the way of someone from another age group in the same race. Races were of 8 minutes duration, sometimes to speed the races up one group started on two minute dial up and another followed on with a four minute dial up. In this case the first group raced for 10 minutes.  Due to the wind conditions most races were a drag up and down the runway with a mark at each end.  Predictably, in many races competitors dropped into the same order over the eight minutes.

The Masters games is divided into age groups starting at 35+ years. You can see by the results how the age groups were set out. Our largest group was 65+ years with 16 competitors, second largest was the 70+ group with 12 entrants. Usually Blokart entrants are broken down into weight groups, this year, weights were not considered, it was all on age.  Wind conditions were on the light side but were better on Saturday as the wind gradually improved.

This was a really good event, well managed and Manawatu did an excellent  job. To all those who entered and like myself, stood little chance of receiving a medal, thank you. To run any event successfully requires a large  entry field and if only the guns entered events would fade away. Then to, much depends on the wind, on another day with different winds or a more technical track who knows what might have eventuated. So to all those who entered, thank you, the success was in your hands, look forward to seeing you at the North island open in May.