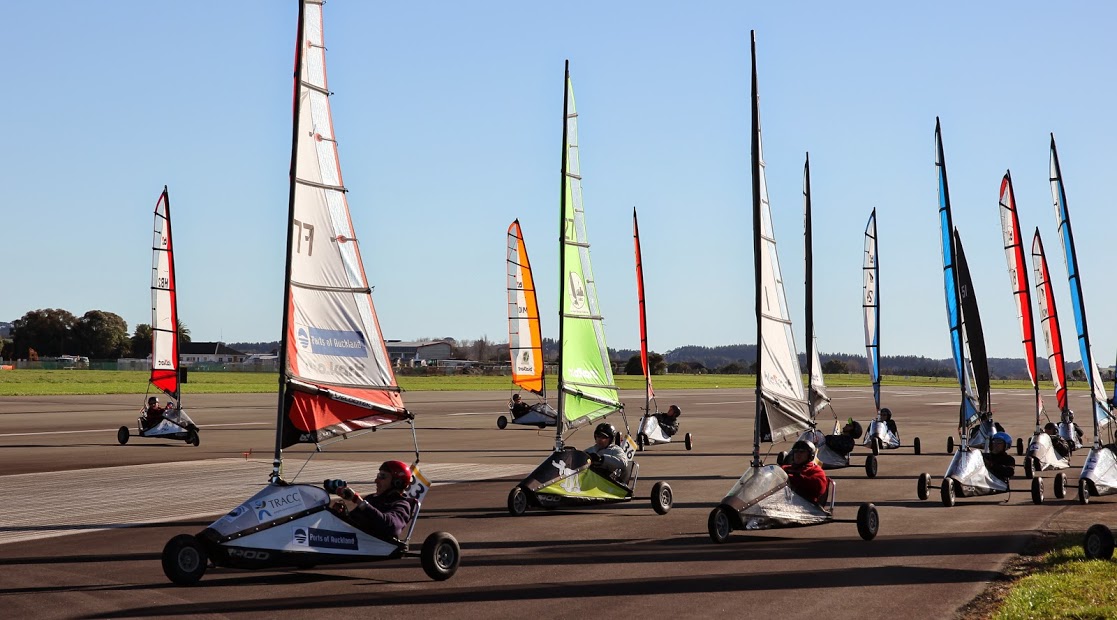 The following review is edited from the ABC’s newsletter:

The event started with dinner and drinks at the Rathole on Friday night.
Saturday started with a heavy frost but clear blue skies. Everyone set up their karts and
registered, including a weigh in, at 9 am. With the scales seeming to weigh heavy, there were
many who moved up to another weight division. Or was it just the big Rathole meal from the night
before? The forecast at this stage was predicting 3-4 knts for most of the day. Everyone was
welcomed to the event and the race officers held the briefing on the format for the day, including
an initial postponement through lack of wind.

Those who ventured out on to the track went
through a transponder check which picked up various mistakes. A few “sucker puffs” provided
some sailing but never more than a couple of minutes before it would drop away again. The very
light sailors enjoyed a bit more sailing than most but it always came back to having to wheel back
to the start. At 3 pm the decision was made to abandon sailing for the day with no races
completed.

Sunday started with a repeat of Saturday, a heavy frost and clear skies. At 8.30 the gates opened
to Ohakea and there was a very small breeze. The briefing was completed by 9.20 with the wind
slowly building. Most started with a 5.5 sail but these were quickly changed to 4 metres as the
wind got up to 12 Knts, puffing above this at times.

There was plenty of action on the course, with two fleets racing at the same time, starting 2
minutes apart. The course was a big square which took about 2.5 – 3.5 minutes per lap depending
on the wind at the time. The races were either 8 or 10 minutes long depending on which division
started first. The heavies and super heavies raced 2 minutes apart which meant about 37 karts
racing around the track, quite a sight when the wind was up.

Every division, 4 in the performance division plus the 3 production karts and the 9 in Cruiser class,
completed 7 races over the day to give a fair result overall. The last 2 rounds were in a dropping
breeze but most were completing either 3 or 4 laps of the course.

The dinner and prize giving at the Sanson Club that night was a fun and friendly affair with plenty
of raffles, plenty of food, plenty of prizes and giveaways. Most went away happy with something in
their pocket.

Some sailed Monday for a few hours, with a building wind, up to where a 3 metre was necessary
for a while. Others headed away early in the morning to get home mid-afternoon.

Thanks to those who helped organize the event,, accommodation, travel, cups and prizes and
the team on the race committee who ran the race side of the event with Ted and also handled
some protests at the finish. Another example of what can be achieved through good club spirit and
cooperation.